I’ve never thought of myself as  beach person. The thought of hanging out on a beach for hours makes me a little numb. That said, I love being able to walk to, and on, the beach daily. During summer – January and February – it has to be early or not at all (and I will find sun-worshippers at 8 AM). Off season any time of day works.
But there remain two issues: 1) the waves are tiny, and 2) they’re often brown.

1) Why are the waves tiny? Theoretically, you could sail in a straight line from Uruguay over 16,500 kilometers before making landfall (and you’ve always wanted to visit Myanmar, no?). That much open ocean and diddly little waves? Why?

2) Brown waves – let NASA tell the story (even if they can barely get within 90 degrees of correctly identifying north). 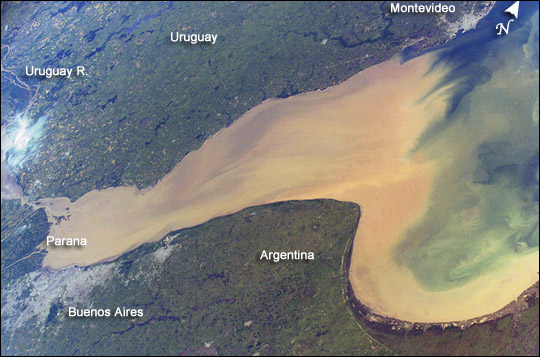 On the day of this photo, we enjoyed blue or green waves ‘north’ (actually east) of Montevideo. A little change in current and winds, and you have brown waves.